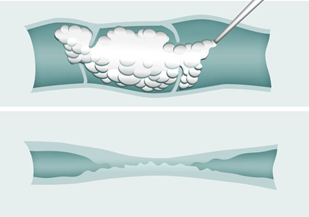 Micro Sclerotherapy is used in the treatment of thread veins, also known as spider veins, which are thin veins visible from beneath the skin in shades of blue, red or purple. While not dangerous, these can impact self-confidence and cause body image issues. During a Micro Sclerotherapy session, a simple liquid saline solution is injected into the vein, preventing blood flow and allowing the vein to be gently reabsorbed into the body.

Foam Sclerotherapy treatment is reserved mostly for small varicose veins. Similar to Micro Sclerotherapy, instead of a liquid solution a harmless foam solution is injected into the varicose vein, once again blocking off blood flow to the vein and allowing the vein to dissolve into the body.

If you think that you might have a leg condition that could be treated with Sclerotherapy, read on to find out more about the options available to you.

Injection Sclerotherapy for both thread veins and varicose veins is remarkably simple and minimally invasive. How long the Sclerotherapy procedure takes is usually dependent on the individual patient, but is usually between 30 and 45 minutes. You will leave on the same day as the treatment, although you may need someone to drive you home.

Micro Sclerotherapy for thread or spider veins involves a sclerosant (saline solution) being injected in a liquid form directly into the veins, causing them to scar and prevent blood from passing through them. The vein is then gradually reabsorbed into the body. It is rare that you would receive Micro Sclerotherapy for larger, varicose veins.

Ultrasound-guided Sclerotherapy for thread veins and varicose veins has become standard practice. The ultrasound scan allows us to see below the superficial or cosmetic veins to ensure that there is no deeper issue that could alter treatment. Similarly, ultrasound guided Sclerotherapy is likely to provide us with a better estimation of success, as well as allowing us to identify the root causes of the varicose veins below the surface.
‍
How to prepare for Sclerotherapy

While Sclerotherapy is a simple procedure, there are a few rules that you should follow regarding your Sclerotherapy preparation.

- Ensure you are wearing loose clothing, i.e. jogging bottoms, shorts or a skirt. Comfortable shoes are also advised.
- Avoid applying creams or lotions to your legs or using bath oils for 24 hours before your appointment.
- Make sure you have something to eat and drink before you arrive.

What to expect after Sclerotherapy?

While Sclerotherapy is a minimally invasive procedure, there are a few things you should expect after your treatment. Both Micro Sclerotherapy and Foam Sclerotherapy recovery times are short, and you may be asked to wear compression stockings for up to two weeks following treatment for larger varicose veins. For smaller varicose veins and thread veins, we will apply a light dressing that can be removed overnight.

How much does Sclerotherapy cost?

A detailed breakdown of our prices can be found here. The price of thread or spider vein treatment begins at £135 for the initial consultation and £390 for each session. Please note that facial thread veins often require 1-3 sessions and leg thread veins may require 3-4.
‍
The Foam Sclerotherapy cost is covered in packages that begin at £1,945 and include the initial Foam Sclerotherapy treatment, plus up to 2 extra sessions to clear up any residual veins (please note that this does not include an initial examination).
It is worth noting that Sclerotherapy is usually not covered by the NHS as it is considered a cosmetic treatment for a superficial condition.

Where can I get Sclerotherapy?

We are dedicated to providing world class treatment for a fair, fixed price and as such, the UK Vein Clinic focuses solely on procedures that have been proven to provide the best results. Our treatments have been carefully designed by Stephen Black and Dr Peter Finigan who ensure that they are based in the latest medical science.

Whether you are looking for Micro Sclerotherapy or Foam Sclerotherapy, we will be happy to discuss options with you. More information on how to get in touch with us can be found here.

Can I exercise after Sclerotherapy?

We recommend walking as soon as possible after Sclerotherapy, as this will help your blood flow return to normal. Returning to more strenuous activities after Sclerotherapy, such as running, cycling, swimming or weight lifting, depends entirely on you, although we would suggest not going too hard too soon!

When can I start tanning after Sclerotherapy?

Avoid tanning (either sunbathing or sunbeds) for four weeks; if exposed to too much direct sunlight, the solution may stain the skin for weeks, months or even years.
Is flying after Sclerotherapy safe?

We would advise against flying immediately after Sclerotherapy and recommend avoiding long-haul flights for 6 weeks following the procedure.

Am I able to take a bath or go swimming after Sclerotherapy?

You shouldn’t have a hot bath for 24 hours after your treatment, and swimming in chlorinated pools should be avoided for 48 hours.

Can you get Sclerotherapy on the nhs?

It is very unlikely that you will be able to claim Sclerotherapy on the NHS, as it is often considered a cosmetic treatment.

How painful is Sclerotherapy?

If you have ever had a vaccination or similar injection, then it would be most comparable to that. Most people feel nothing more than a slight pinch.

Can I get Sclerotherapy during pregnancy?

You would be able to undergo the consultation and scan, though we recommend waiting until after your pregnancy to undertake the procedure.

What solution is used in Sclerotherapy?

In both Micro Sclerotherapy and Foam Sclerotherapy, a saline solution known as a sclerosant is used to treat varicose veins. For more specific information, you can contact us here.

Are there any alternatives to Sclerotherapy?

As well as our liquid and Foam Sclerotherapy treatments, we also offer Radiofrequency Ablation and Veinwave (thermal coagulation) therapies.

Thanks to our non-invasive treatments, there is minimal risk of postoperative pain or complications. However, as with any medical procedures there is a slight chance of minor adverse effects. These can include bruising, redness and tenderness in the treated area and some patients might experience numbness. Very rarely, patients might experience a slight staining of the skin that might not fade over time.

Get expert help with vein health

Book a call now with one of our specialist advisors